Autonomous Vehicles seem to be all the rage as we start 2015, it seems that everyday there is some new developments regarding such cars and today is no different. An announcement has been made that NASA and Nissan are entering into a partnership that will result in the development and production of autonomous vehicles. In a press release from Nissan they stated that they “will focus on autonomous drive systems, human-machine interface solutions, network-enabled applications, and software analysis and verification, all involving sophisticated hardware and software used in road and space applications”. Now imagine that, the Nissan Leaf incorporating NASA space applications! 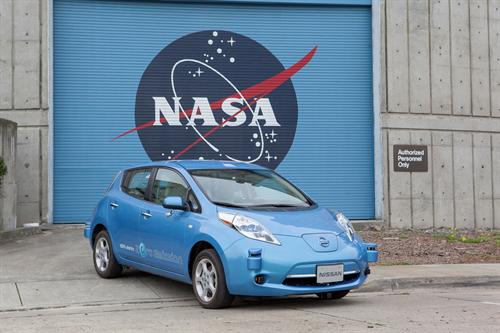 Not only are they planning on releasing autonomous cars, but they also plan on making those vehicles completely emission free, with the first vehicles ready for testing towards the end of 2015. It sounds like a good move on NASA‘s part, who mainly rely on funding, to get involved with something that may actually be profitable to them. Whilst the first cars will be put to the test towards the end of this year, Nissan have pointed to 2020 as the year when everything should be ready. That sounds a little far away when you consider where other manufacturers like Mercedes are with autonomous vehicles, but Nissan/NASA are looking further into the future and want to bring about an autonomous car that can navigate itself in almost all situations including some of the more testing ambiguous scenarios that are presented in city driving. So the future looks bright for Nissan’s city cars like the Leaf and the Nissan Note, we imagine these will be the first Nissans to benefit from the NASA link up.